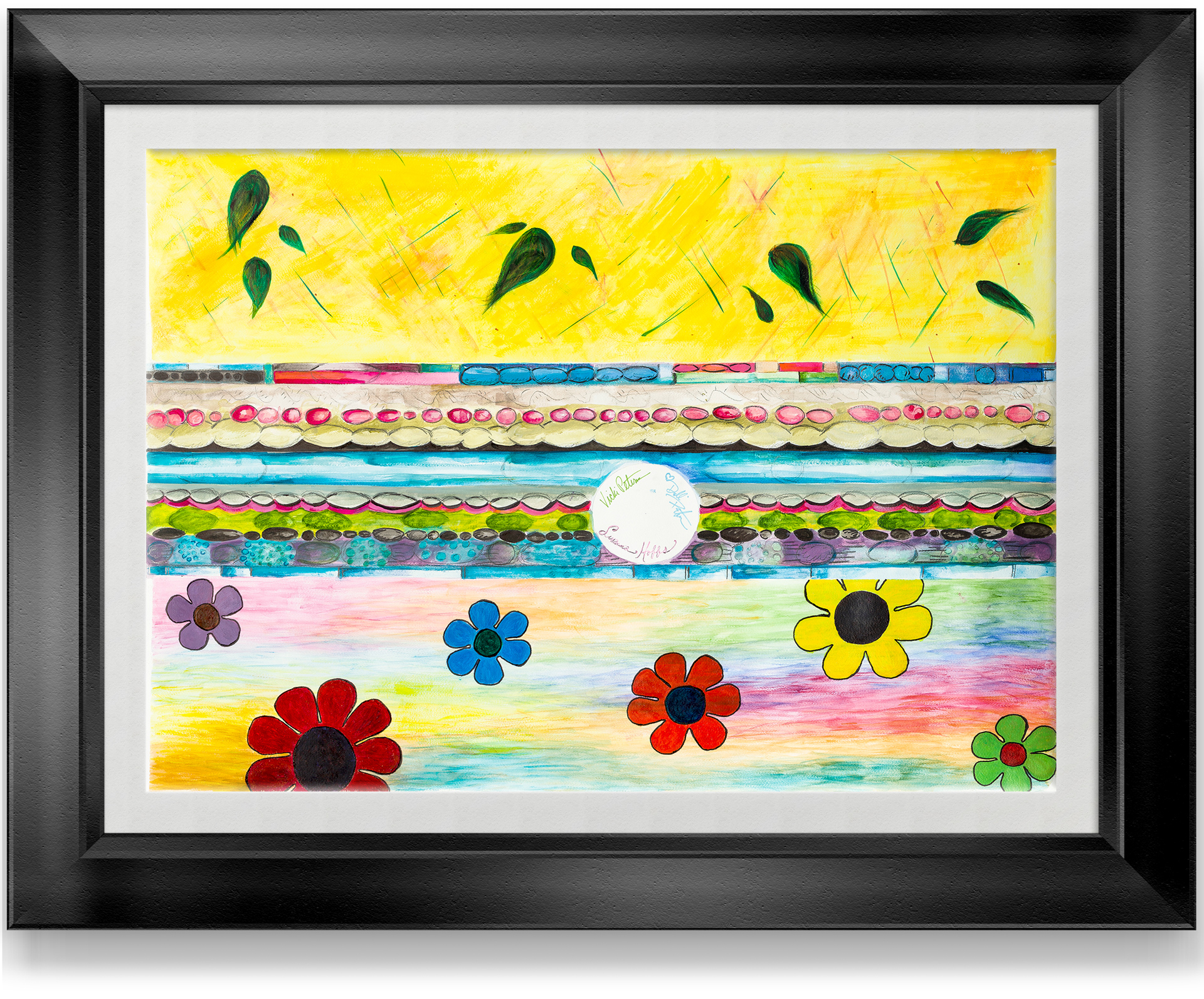 THE BANGLES’ ART IN A CORNER PAINTING

Images of a Garden (2016) by The Bangles
The painting will be auctioned online via Paddle8:
BID 17.11. – 02.12.2016
VISIT paddle8.com/auction/eazl OR DOWNLOAD PADDLE8 FREE IPHONE APP.
Proceeds go to Children & the Arts and Youth Music

It was over 30 years ago that guitarists Susanna Hoffs and Vicki Peterson and drummer Debbi Peterson formed the Bangles in a Brentwood, California, garage. They did so based on two crucial elements: their common love for rock’s golden age (“Growing up loving the same music has always been the glue for the Bangles,” says Susanna) and the crystalline sound they quite naturally created when they blended their voices (“The chemistry was there instantaneously. It just clicked,” Debbi recalls).

Legendary musical guru Rodney Bingenheimer gave the girls’ self-produced single ‘Getting Out Of Hand,’ airplay, and soon “The Bangs” were signed by Faulty Products, a subsidiary of IRS Records. Renamed The Bangles, the girls hit the road in ’82 opening for The English Beat, and in the process got signed to Columbia Records. Former Runaways lead singer Michael Steele replaced Annette Zilinskas on bass, and the Bangles began a steady climb to the top. The band released their first full-length album, All Over The Place in 1984, with the singles ‘Hero Takes A Fall’ and ‘Going Down To Liverpool,’ making a splash on college radio.

Opening for Cyndi Lauper’s ‘84 tour exposed them to an ever-widening audience, and helped their 1985 album, Different Light make a huge impact. Featuring the hits ‘If She Knew What She Wants,’ the Prince-penned ‘Manic Monday,’ and the smash dance track ‘Walk Like An Egyptian,’ the Bangles rocketed to superstardom. ‘Egyptian’ charted at Billboard’s #1 for four weeks in a row – a feat no other all-female band had ever achieved. A smash national tour, and awards including Single of The Year, Best MTV Video Performance, and a BMA helped solidify the band’s status. In ’87, the Bangles recorded a hard rocking cover of Simon & Garfunkel’s ‘Hazy Shade Of Winter’ for the Less Than Zero soundtrack that rocketed to #2 on the charts. That summer found the band at the peak of its popularity, and back on the road for the ‘Bitchen Summer’ international tour. In early 1988, the Bangles released Everything, with two more chart hits: the rocking ‘In Your Room,’ and the seminal ballad ‘Eternal Flame,’ which was a #1 hit internationally and has become a romantic classic, performed recently on singing competitions “The Voice” and “American Idol.”

Despite (or perhaps because of) their successes, the band was exhausted, tensions were high, and in 1989 they decided to take an extended hiatus, canceling the rest of their world tour. In 1990, the Sony-released Greatest Hits broke sales records in Britain, charting in the UK Top 10 for an incredible 97 weeks, and peaking as the #4 album in the country. The band members stayed in touch, but serious talk about reforming the Bangles didn’t begin until Susanna’s husband, award-winning director/producer Jay Roach, needed an original song for his film, Austin Powers: The Spy Who Shagged Me.

“Where are the bangles in 2014? We’re back in the garage where we started!” Susanna 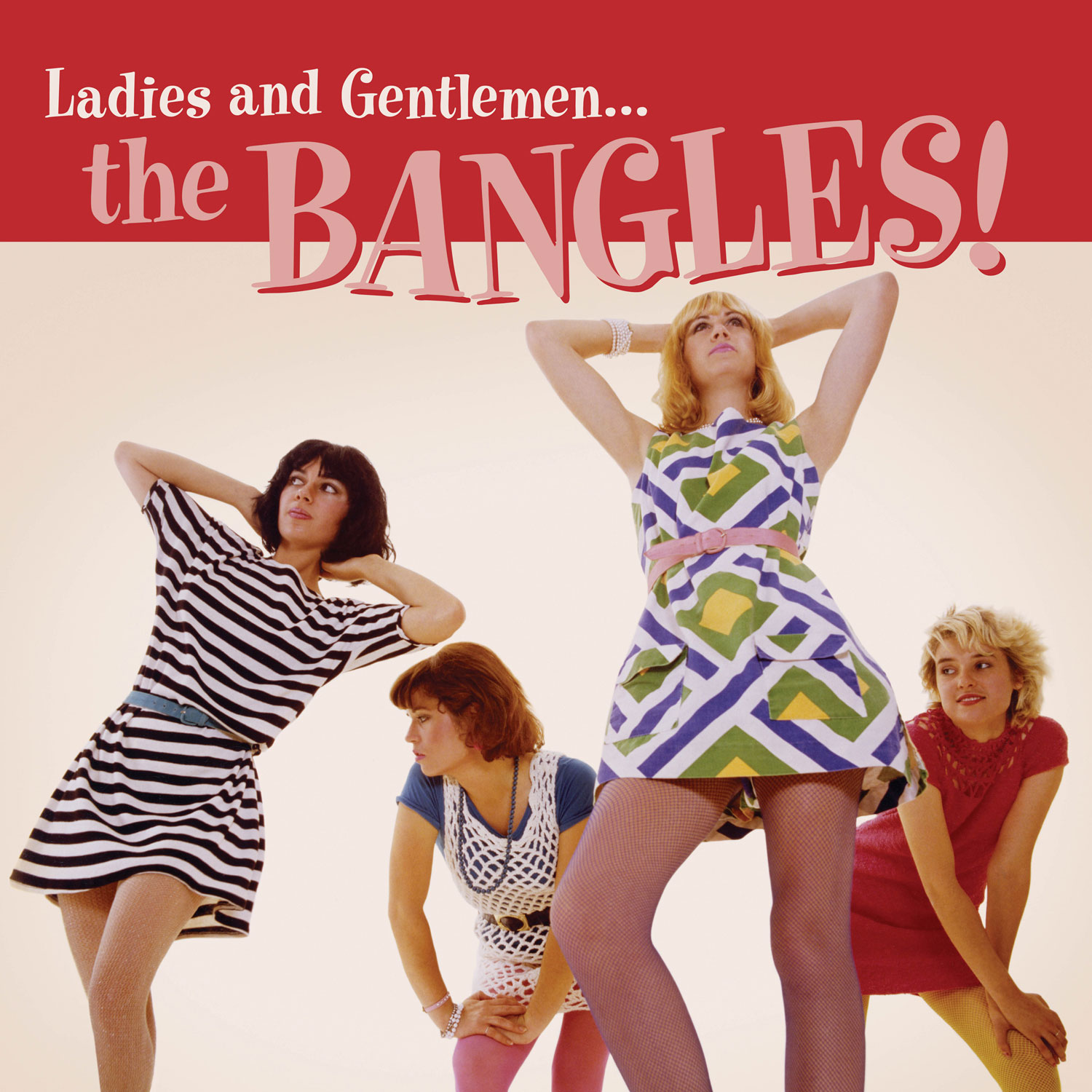 In 1999, Vicki, Susanna, Michael, and Debbi headed back into the studio to record ‘Get The Girl’ for the Austin Powers soundtrack, and The Bangles formally announced their reunion in 2000.

In July 2003, the Bangles proudly released the power-pop driven Doll Revolution, their first studio album in over a decade. A fan and critical favorite, Doll Revolution went to #23 on Billboard’s Top 100 Independent Albums for 2003, with the single ‘Something That You Said’ going Top 40 in the UK and enjoying extensive airplay throughout Europe. Appearances on The Tonight Show and Graham Norton, a smash Japan tour, and sold out European and US Tour dates kept the band busy. In 2005, longtime bassist Michael Steele elected to retire from the band, but drummer Debbi Peterson, and guitarists Susanna Hoffs and Vicki Peterson continued performing and touring internationally.

In 2011 The Bangles produced their latest album, SWEETHEART OF THE SUN, which was recorded by Matthew Sweet and mixed by Jim Scott (Tom Petty, Wilco). “We went into the album thinking we wanted to pay tribute to Los Angeles and the California music that we grew up with during the 1960s,” says Susanna. “As we were finishing the record,” says Vicki, “we started to realize there was a unifying theme—paradise lost in Southern California, the perception juxtaposed with the reality of it.” Susanna picks up the thought: “L.A. is like paradise—the sun shines 360 days a year, the flowers are always in bloom—but meanwhile, so many people are walking around alienated, depressed and anxious.” SWEETHEART OF THE SUN reveals The Bangles at their equally beguiling extremes, as soaring folk-rock harmonies coexist with adrenalized rave-ups inspired by the band’s roots in Nuggets-era garage rock.  “We really started out as an indie band, very simple grassroots. We didn’t have any money or publicity behind us — we were truly a garage band,” says Susanna.

2013 was a year in which The Bangles re-energized by getting back to the basics. They participated in the Paisley Underground Reunion show, where they played with other Southern California bands from the same scene, all of whom were influenced by the psychedelic movement of the 60’s.

So why are they still making music, and still doing it together? After all, each of them has a fulfilling life outside of the band. “I feel like I do it because I have to do it,” says Vicki, “but more importantly, I want to do it – we all do. The writing and recording have become more enjoyable than ever. During the course of making this record, we came up with a really nice working method that makes it doable for us and easy to fit in with other aspects of our lives.” Debbi adds:  “I think it’s important for all of us to keep moving on and creating, because that’s why we got into this in the first place.” Remarkably, the Bangles’ second time around has lasted longer than the first, as the three longtime partners harmoniously coexist with their respective husbands and children; making music together is now another familiar, rewarding part of their lives. Much has changed in the lives and careers of Vicki, Debbi and Susanna since that first time they played and sang together in the Hoffs family garage years ago. Ask Susanna, and she’ll say, “Where are the bangles in 2014? We’re back in the garage where we started!”